Anupamaa’s life in Rajan and Deepa Shahi’s “Anupamaa” is always full of tears and miseries. Just when we feel that things are finally good for her, life throws a new challenge at her.

Recently, we saw that after Kavya took up a job at Anuj Kapadia’s office, and Vanraj couldn’t bear it. He accidentally hurt himself too and when Anupamaa tried to clean his wound, he pushed her. Pakhi, who was very excited about topping her exams, saw all this and was in tears. She was heading back to her home when she slipped off the stairs.

The family brings her on the sofa, post which we see her breakdown. Pakhi tells Vanraj that if Anupamaa doesn’t interfere in his life then even he should stop doing so. She tells Anupamaa that she should understand Vanraj’s state of mind and console him instead of blaming him. She also tells Kavya that there is a way of saying things and she should be careful next time onwards.

She then tells her parents that she wants a selfie with them and posts it on social media. Anuj sees that pic and is surprised to see Anupamaa and Vanraj together. Later, Anupamaa and Vanraj have a conversation where they talk about not letting their differences affect their kids.

The next day, Anupamaa meets Anuj and tells him that she is quitting because her kids are getting affected by whatever is happening in the house. Anuj is shocked to hear this.

In the upcoming episode we will see that Vanraj and Anupamaa come together to cheer up Pakhi. Also, Nandini tells Anupamaa that she is leaving for the U Sbecuase if she doesn’t then Rohan will kill Samar. To know what happens next, keep watching “Anupamaa”. 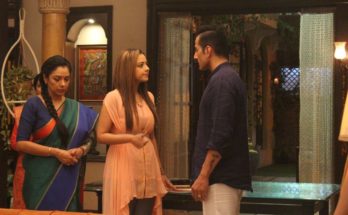