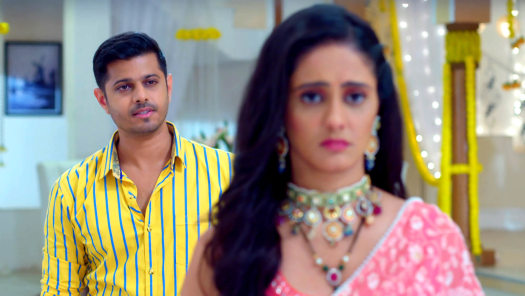 At the beginning of the episode, Sai tells Pulkit that she does not love Virat and Pakhi is also there between them. Pulkit says if Pakhi was not there in their equation, would she have loved Virat then. Sai says it was impossible because of Virat’s behavior. Pulkit says Virat promised in the hospital that he will treat her well. Sai says he was good, but then he made the plan of the trip, and now he takes out all his frustration on her. She says Virat is not able to handle that Pakhi and Samrat are together now and Pakhi always rubs it in his face. She says she cannot tolerate their emotional drama. Pulkit asks what drama. Sai tells him that she saw Virat and Pakhi in a cafe holding hands. Pulkit is shocked. Sai says she just wants to take herself away from their mess. She also tells him that Virat locked her up in the room.

Samrat asks Virat why he locked Sai in the room. Pakhi says it is so that Sai can be a part of this puja, but it is no use showing that she is happy when she is not. Virat says he just wants Sai to realize a few things. Samrat asks what realization and does he know how wrong he did. Virat says Sai is very stubborn and he was forced to take this action. Samrat says how can he justify his action. Mansi also says Virat is wrong. Bhavani says there is no need to justify, as he did nothing wrong. Bhavani says Sai must learn to follow traditions. Shivani says Sai has helped them escape those old traditions. Shivani taunts Pakhi for not doing anything for the family. Shivani and Pakhi have an argument. Pakhi says if she did nothing for this house, then why they stopped her from going to he parent’s house. Ninad tells everyone to focus on Samrat and Pakhi. Samrat says his focus is still Sai. He says Virat had no reason to lock Sai.

Sai tells Pulkit that Virat challenged her to go to college, so she accepted and came here. Pulkit says what is the need of going to Gadchiroli, as she can stay in their house and complete her studies, Sai says if she stayed in Nagpur, then they will try to convince her to come back. Pulkit asks where she will stay till her transfer is accepted. Sai says she will stay in Chavan Niwas itself.

Samrat says how can Virat think that Sai’s studies will not get affected if she misses her college. He says not scoring well can make her lose her scholarship. Devi also scolds Virat for his action. Bhavani tells her to not interfere. Samrat tells Bhavani to scold Virat instead. Samrat asks Virat for the keys. Ashwini hears this in her room. Virat says he cannot give the keys. Ashwini comes down and asks why they are making so much noise. Shivani tells her that Virat locked Sai. Ashwini is shocked. Bhavani and Ninad accuse Sai of spoiling the family’s peace. Omkar and Sonali say Sai is still immature and she must learn her responsibilities. Samrat tells them to stop and asks for keys again or else he will break the door.

Devi holds Virat’s hands and asks Samrat to take the keys from his pocket. Samrat asks her to release him. Virat gives the keys. Samrat says there are many ways to make your point. Pakhi tells Samrat to not interfere in their matters. Samrat says Sai is no stranger to him and Sai is like his younger sister. He says being a woman herself, how Pakhi can see all this and keep quiet. Samrat goes up to open the door.

Sharan Anandani: For me, Rajan Shahi sir is a legend in the TV industry, his storytelling, and how he explores intricacies of various relationships is wonderful