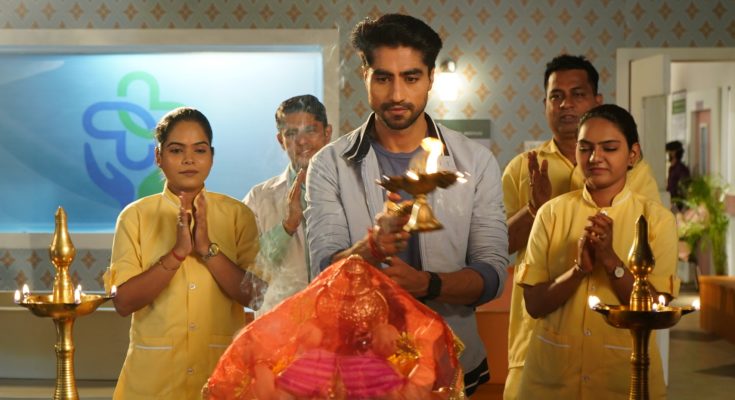 In the beginning of the episode, The family gets emotional while bidding her farewell except for Arohi who’s unaffected. Kairav picks Akshu’s luggage, Before Akshu gets in the car her cloth gets stuck and she remembers how Abhimanyu on Dhanteras night took it out. Kairav says to her that once she reaches Pune his friend will meet her and give her a new number. He says to her to start fresh in a new city with a new phone number and people. Akshu while getting inside the car remembers Abhimanyu’s first call to her and gets emotional. The car starts and she takes her head out of the window and says bye to everyone.

Kairav in his room sees the photos of Abhimanyu and Akshu. Vansh comes there and says to him that he today noticed him pulling away from Akshu today. Kairav tells Vansh that he asked Akshu to leave as she loves Abhimanyu. He says Arohi already hates her and if she stayed longer then things would have gotten out of hand. Vansh says he did it out of care but he did right or wrong they’ll find out later. Kairav and Vansh notice Akshu’s keys there and Kairav says he’ll go after her and give it to her.

In the traffic Akshu car is stuck, Abhimanyu parks his bike beside her and notices her inside and remembers all of their moments together. Akshu sees him and gets emotional and is about to say something to him, her car drives past him. A guy parked beside Abhimanyu’s bike misbehaves with his girlfriend. Abhimanyu gets down from his bike and starts slapping him. The police intervenes and asks what happened there. The guy says that Abhimanyu all of a sudden got off of his bike and started slapping him. Abhimanyu tells the police that the guy misbehaved with his girlfriend and if he did that again he will happily beat him again. When the police are about to take him, Kairav stops them and says he knows Abhimanyu and talks to the police. Kairav says to Abhimanyu that he should not take his anger out on somebody else. Abhimanyu tells Kairav that Akshu told in front of him and his family that she doesn’t love him. Kairav is shocked and says that’s why she got ready to leave everything and go.

Upcoming- Abhimanyu says to Mahima that on Dhanteras night he showed her Akshu’s picture and she didn’t react otherwise so how did such a big confusion be created in the house. Akshu calls Niel and asks him how the arrangements are coming together. Niel says it’s fine, Abhimanyu comes from behind and asks what’s happening there.

Anupama 2 December 2021 Spoiler –  Baa apologises to Anuj and GK, Vanraj welcomes them for the celebration